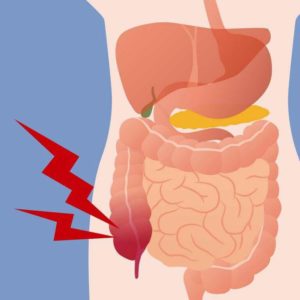 The pathology of the small intestine is dominated by the problems of flanges and adhesions. This phenomenon frequently occurs after an intervention in the abdomen. Bridles are internal scars that form between different organs and cause bowel strangulation and occlusion.
The occurrence of flange is unpredictable and any operation of the abdomen can lead to the formation of flange even a simple old appendectomy.

In case of occlusion on flange, the intervention must be carried out in emergency. The flange has the effect of blocking the arrival of blood in the tissues which then evolves towards necrosis (or devitalization). On the other hand, if the occlusion is lifted quickly, recovery is rapid.

This situation occurs when the diagnosis is late. The intestine necroses and, despite the section of the bridle, the surgeon is forced to remove a segment of intestine. To put the extremities end to end, he makes an anastomosis (or "a suture"). Recovery is longer.

Appendectomy is the most common digestive surgery procedure. It is performed urgently in young patients.
The picture of acute appendicitis is often quite atypical, possibly suggesting gastroenteritis, a urinary tract infection or, in women, a gynecological problem. Most often the pain is located between the umbilicus and the right iliac crest.
The blood test is an important diagnostic element but it is sometimes normal. Often there is inflammation (increased CRP) and infection (increased white blood cells).
The ultrasound has only positive value as well as the scanner. After simple appendicitis, the patient recovers in 2-3 days. If it is peritonitis, the problem can be much more complex and hospitalization is more like a week.
These interventions are detailed below:
Single flange section.
Flange section with resection of the small intestine.
Appendectomy.