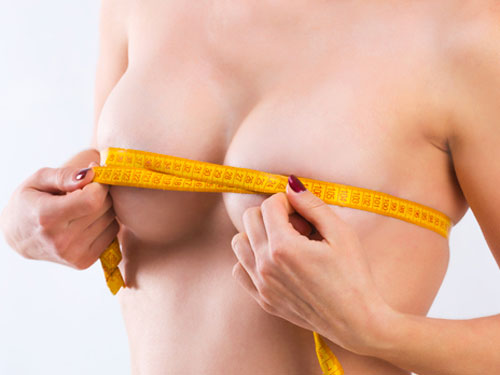 intervention breast augmentation is indicated in 4 main situations:
Mammary hypotrophy, it is about young woman, often thin having had an insufficient development of their mammary gland during their puberty and who wants a "normal" chest. The only placement of an implant, generally behind the pectoral muscle, will bring the desired volume and shape.
Breast ptosis and glandular wasting (sagging and emptied breasts), this is the case of women who have had several pregnancies, or having lost a lot of weight, often more than 20 kg. The breasts are then flat and rest on the upper part of the belly. The objective will then be, by a double operation of mammaplasty, to raise the breast, associated with the establishment of implants, to fill it, in particular on the top by a prosthesis behind the gland thus remodeled.
Augmentation of an already existing breast: this is a patient in a pure aesthetic approach. The volume of the breasts is considered insufficient and the desire for an even more feminine breast is expressed. An implantation will then be decided, the volume and shape of which will be adapted to the wishes of the patient and to the pre-existing breast. The prosthesis will most often be placed in front of the muscle.
Abnormalities, malformations: breast asymmetry, tuberous breasts.

Can breast implants be fitted before pregnancy?

Yes, because the prosthesis is located behind the mammary gland or even deeper, behind the pectoral muscle. The mammary gland therefore functions normally and pregnancy is possible, and breastfeeding is also authorized but may be compromised because of the periareolar incision. On the other hand, since pregnancy often leads to changes in the breasts (sagging, empty, flattened), it is wise to postpone the operation if a pregnancy is planned within the next 6 to 12 months.

What are the different types of prostheses available?

It consists of a 4 cm incision, behind the knee, in the fold, to slip into a detachment under the muscular envelopes, an elongated implant of oval or asymmetrical drop shape. Several models exist depending on each case. There are 2 main types of prosthesis materials in France:
Silicone: gel today more cohesive and stable compared to older implants. It gives the best results over the long term.
Physiological serum (salt water, natural) totally harmless but with greater risks of deformation and deflation.
Note the hydrogels and polyurethane which are used very little.
There are several forms of prostheses:
Rounds with a more or less high profile, allowing you to choose a projection on demand.
Anatomical, drop-shaped or asymmetrical, with a mirrored shape between right and left, seeking a natural appearance but at the risk of secondary rotation, despite everything very low.

What is the lifespan of a prosthesis put in place?

The prostheses have an envelope which wears out gradually. Its rupture seems inevitable within a variable period. In theory, the lifespan of a breast implant is on average 15 to 20 years. Regular monitoring of a silicone implant is essential. An annual control visit to the surgeon is necessary from the 2nd postoperative year. Concerning the saline prostheses (filled with saline solution), no monitoring is necessary since the rupture results immediately in a deflation of the prosthesis. The water will be absorbed without complication. The change will be programmed from the moment the rupture diagnosis is made. This must be done quickly to avoid irreversible deformations of the breast which retracts in an anarchic way around an emptied and crumpled implant. It should be considered that a breast implant is almost never definitive. A change of prostheses is a different surgical procedure from the first, but often better tolerated than the first placement.

How is breast augmentation performed? 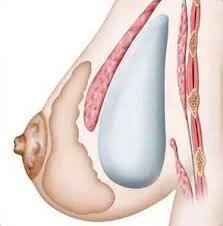 It takes place under general anesthesia. Before the intervention, a systematic mammogram and ultrasound will be performed. A 12-hour hospitalization in a clinic is generally sufficient. The scar, which is about 5 centimeters long, is either under the arm, in the armpit, either around the areola in its lower half at the border between the colored skin of the areola and the light skin, or in rare cases in the groove under the breast. It usually becomes almost imperceptible. My priority option is the inferior hemiareolar approach which offers the best possible result while remaining discreet and hidden.
It will always be placed behind the mammary gland (thus projected forward) and, depending on the case, either behind or in front of the pectoral muscle, depending on different criteria: Shape and volume of the pre-existing breast Fineness of the skin and subcutaneous fat, particularly in the upper part of the breast Tone of the pectoral muscle The patient's desire for the final shape of the breast: more or less rounded, more or less high Sports activity repeat the same situation as before Type of implant, e.g. serum prostheses are preferentially retro-pectoral

When you wake up, the breasts will be maintained:
Either in a non-wired support bra, closed in front, to be kept for 6 weeks
Either by a bra with a breast lifter, "bandeau" with a Velcro strip, tight on the top of the the chest, to keep 2 to 3 weeks, day and night and which will maintain the prostheses in good position.
Sometimes, on the side come out 2 small pipes (drains) connected to a bottle which sucks up the serous fluids produced by intervention. They will be removed most often before the release. They are not systematically placed.

What are the post-operative consequences of breast augmentation?

The consequences are a little painful, especially if the prosthesis is located behind the muscle. At the exit, antibiotics and painkillers will be systematically prescribed. The threads are most often resorbable and do not need to be removed. During the first 8 days, it will be forbidden to carry weights, to keep in the air or driving a vehicle. A minimum work stoppage of 5 days is required. Then normal activity is authorized. Sports will be prohibited for 6 weeks. The short-term risks are hematoma, infection or displacement of a prosthesis. An intervention may then be necessary.

Can operated breasts be monitored normally?

Yes, because the pre-existing mammary gland is located anteriorly under the skin. remains accessible to palpation and any radiological examination. On the other hand, it will be important to properly inform the radiologist who must handle the breasts carefully. We recommend carrying out this examination in centers experienced in this situation.

Are there any long-term health risks after MA?

It has been demonstrated by large-scale scientific studies that the fitting of silicone prostheses does not cause any general disease, nor does it favor the appearance of cancer. On the other hand, the silicone which could escape after rupture is likely to damage the tissues where it attaches. Monitoring by annual visits to the surgeon and mammograms to detect a possible leak are mandatory at least once every 2 years. Changing the prostheses, which is done on average every 15 to 20 years, will prevent any problems.

When do you get the final result of the breast implant?

At first the breasts are taut and bulging at the top, but gradually over 3 months, the breasts deflate, losing 15 to 20% of their immediate postoperative volume, soften and set in place. The remote risk is the appearance of a shell, which is an overreaction of the body to the implant. The breast then becomes firm or even hard. To prevent this “periprosthetic contraction”, daily self-massages will be prescribed and explained from the 3rd postoperative week. This risk, which sometimes requires surgical revision, remains rare, around 1-2% of cases.

Breast augmentation will most often be carried out by the fitting of prostheses. The choice of this will be made in consultation with the surgeon who will take into account all the aesthetic, psychological or medical criteria. The large choice of implants available and the current quality of the materials used allow us to hope for a very natural result in complete safety, subject to regular monitoring. A new technique, by injection of hyaluronic acid (Macrolane), allows moderate breast augmentation without intervention. The product is 100% resorbed in 2 years; it is therefore advisable to re-inject a 1/2 dose every year. It is a technique that has 3 drawbacks in my view: non-permanent, expensive and not 100% validated by learned societies who have reservations about their theoretical safety in the long term.