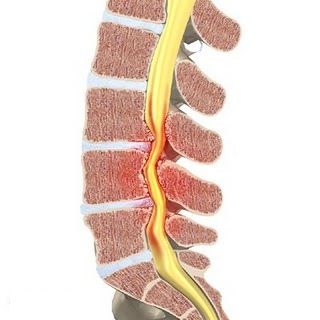 Lumbar canal stenosis or narrowing of the spinal canal at the lumbar level is a relatively common condition, especially in older people. People who suffer from it complain of pain in the lower back with radiation to one or two lower limbs. The typical character of these pains is their occurrence after walking or after spending some time standing; pain in the back and lower extremities worsens. The lower limbs lose their sensitivity and become uncontrollable. To decrease symptoms, patients should sit, lean forward, or squat. Lying on your side or with your legs elevated often helps too. Standing still after walking does not help because complaints also occur after prolonged standing. While we normally walked in a more upright position, we lean forward somewhat because this position helps to support complaints. Sufferers are therefore increasingly reluctant to engage in daily activities or social contacts, which can lead to social isolation. It is also noted that most patients who suffer from lumbar canal stenosis can ride a bicycle without significant back or lower limb complaints. To fully understand the condition, it is important to know more about the anatomy of the spine. 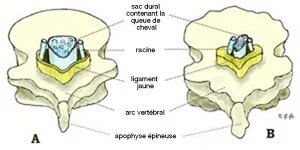 The cause of complaints is a narrowing of the spinal canal (stenosis). Over the years, in older people, the spine tends to wear out. This wear and tear is a normal process of aging observed in everyone, but the importance of this phenomenon varies from one person to another. This wear, which is also called osteoarthritis, also affects the hip or knee joint. As a reaction to osteoarthritis, spinal bone thickens especially at the joints, which can narrow the spinal canal. The yellow ligaments are also thickened, leaving less room for cauda equina and nerve roots at the stenotic canal. The space that remains is also determined by the importance of the phenomenon of wear and by the width of the channel, which can differ from one person to another.
The width of the canal already differs greatly from birth. People with a narrow channel at the start will suffer more quickly because the reserve will be quickly reached. In patients with a very narrow birth canal, complaints can occur in young age.
Complaints worsen due to position-dependent narrowing of the spinal canal. When walking and standing, we generally have a hollow back. This has the consequence that the spinal canal narrows, which after some time leads to compression of the nerve roots. When you lean forward or sit down, the lumbar spine straightens or even curves in the other direction. In these circumstances, the vertebral canal is wider and the compression disappears. So there is room for the nerve roots again and the pain decreases. Initially, the stenosis may concern only L4/L5 because this level is already the narrowest, but in the event of extensive stenosis, other levels may be involved (L3/L4, L2/L3 or even L1/L2). The wear phenomenon can also affect one or more intervertebral discs. These can obviously further aggravate the limitation of space, but it is especially in the event of a real hernia that the wear of the intervertebral discs will manifest itself. The pain radiating to the lower extremities behaves like hernia pain, worsening with coughing and sneezing.

The purpose of the operation is to remove the compression suffered by the nerve fibers. For this, it is necessary to remove part of the tissues which obstruct the channel (bone formations, articular surfaces, ligaments, even parts of the intervertebral discs). The operation will be done under general anesthesia. The anesthetist will tell you the terms and the risks.
A urinary catheter is usually placed at the start of anesthesia. A short radiological examination, carried out on the operating table, makes it possible to locate the narrowed part of the spinal canal and to precisely determine the location of the skin incision. The length of the incision depends on the type of stenosis which can be limited to one vertebra or on the contrary extend to several. Once the tissues have been incised, the surgeon spreads the muscles of the back on either side to gain access to the canal. The surgical procedures can then be different depending on the type of stenosis. Depending on the diagnosis, the clinical examination and the radiographic results, the operation may consist of simply removing fragments of bone, joint surfaces or ligament tissue. Sometimes, it will also be necessary to destroy the part of an intervertebral disc which forms a herniation or has ossified. In other cases, it is necessary to extend the operation by removing a vertebral arch, an entire articular surface, ligaments and one or more processes (unilateral or bilateral laminectomy).
Each case is different, the precise modalities of the intervention will be specified to you by your surgeon.

For the first few hours after the operation, patients must remain on their back in order to compress the small vessels in the operated area. Blood from the operating area is also sometimes evacuated via a drain. The patient is also placed in a bladder catheter so that he does not have to change position to urinate. The pain following the procedure is usually caused by the surgical manipulation of the bone. Patients are given painkillers, but this pain subsides rapidly over the next few days. Generally, the patient then notes that the complaints present before the operation have disappeared. Since older people tend to develop thrombosis in the lower limbs after an operation, the current trend is to ask them to walk as soon as possible in order to stimulate circulation. They also receive a drug against this phenomenon of thrombosis until they are completely mobilized. Patients also receive anti-thrombosis stockings which must be worn continuously even after discharge from hospital until preoperative mobility is restored. Eventually with the help of physiotherapy, the patient will be mobile enough to go home after a week.

The operation is technically not very risky. However, if several levels have to be operated on, the operation may take longer with more blood loss. Since most people with spinal stenosis are older, the risk of narcosis is greater (complications related to the heart and lungs). Thanks to the modern development of instrumentation, the operating time can now be reduced to a maximum of one hour, with the rare need for a blood transfusion. It is however necessary, before the operation, to stop taking anticoagulants or aspirin (from 10 days before the operation), possibly after approval from the internist. However, in our service, in prevention of thrombosis, the intervention or the day before the intervention, we administer a doseable anticoagulant, which does not seem to have any influence on blood loss during the operation. In some clinics, stimulation of the circulation in the lower extremities is used for the prevention of thrombosis through the use of special elastic stockings or stockings that are inflated rhythmically by an apparatus. The risks of surgery in these elderly subjects are therefore mainly related to age and general state of health, such as cardiac or pulmonary pathologies which can prevent the prone position or make it difficult to tolerate. With the modern development of anesthesia, however, there are almost no age-related limits any more and, moreover, with the appropriate measures, it can generally be ensured that the operation is feasible. The specific risks of the intervention are, just like an operation for hernia, an increase in the manifestations of nerve damage (paralysis, loss of sensitivity) following the manipulation of the roots which have been compressed for a prolonged period. Release of a heavily compressed dural sac can also lead to perforation of the dural sac with fluid leakage, which will be treated with bed rest for 3-5 days. Other rare risks are bleeding in the procedure area and wound infection.