Calcifying tendinopathy of the shoulder 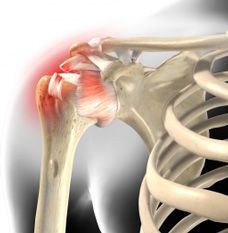 Calcified shoulder is a common cause of shoulder problems. It mainly occurs between the ages of 30 and 50 and women are particularly affected. It is estimated that one in ten German citizens have calcium deposits in a shoulder tendon, which are by no means always painful. If pain occurs, it is usually sudden and without prior stress. Typically, there are strong movement complaints - especially with overhead movements, but also when resting at night.

Today, the surgeon may decide to create a space to allow the camera to have access (extra-articular endoscopy), for example around the tendons (tendinoscopy).

Calcium deposits in the tendons as a cause

The tendons cross the shoulder joint. They run in a narrow space between the acromion and the humeral head. For reasons still poorly understood, the body sometimes transforms tendon cells into cartilaginous cells and stores calcium salts (formation phase). Areas of the tendons where blood flow is critical or where pressure is exerted by the acromion are particularly affected. Diabetic patients appear to be at increased risk for this phenomenon.
The lime deposition process can last for years and can also be inactive for a long time in between. At some point, the calcium crystals dissolve again and break down (resorption phase). As a result of remodeling processes, tendons often thicken, which causes discomfort. Symptoms are aggravated by muscle imbalances, which is when there is a disproportion in the strength of the muscles surrounding the shoulder, causing the tendon to rub against the acromion. It is not uncommon for strength athletes who train primarily for optics to pull up the head of the humerus and pinch the supraspinatus muscle in the acromion.
In the worst case, calcium deposits can break open and enter the shoulder bursa. This often results in an extremely painful acute inflammatory reaction.

The calcified shoulder must be differentiated from other causes of pain such as a tendon tear or osteoarthritis. Calcium deposits at the tendon attachment can usually be seen well with an X-ray of the shoulder joint and an ultrasound (ultrasound) examination. The extent of any concurrent bursitis can be seen particularly well on ultrasound.
Only the doctor can verify if the identified calcium deposits are really the cause of the pain through an accurate medical history and physical examination. It examines the interaction of the muscles of the shoulders, back and chest.

Limescale usually heals on its own within a few weeks or months. The treatment is generally conservative at first, that is to say without surgery.
Short-term administration of painkillers, called non-steroidal anti-inflammatory drugs (NSAIDs) such as ibuprofen or diclofenac, usually helps with the first sharp pains. In certain circumstances, a local cortisone injection can be useful. It has an anti-inflammatory and decongestant effect and reduces pain for several days.

Surgery is the last option

If all attempts at conservative therapy remain unsuccessful over a long period of time, surgical removal of calcium deposits may be considered. Calcium deposits can be opened and removed in a minimally invasive procedure, arthroscopy. The surgeon, under general anesthesia, inserts a very fine endoscope into the joint space below the acromion and carefully removes the calcium deposits there. For those affected, success can be felt quickly, as the pain decreases dramatically and they are usually completely asymptomatic within two weeks. However, it takes about two months for the shoulder to be able to bear weight and move freely again. For this reason, targeted exercises are (re)started immediately after an operation to maintain mobility and strengthen the muscles that stabilize the joints.
It is very rare for calcium deposits to return. However, a calcified shoulder often occurs on both sides (nearly 40% of cases).

The post-operative period can be marked by pain, without it being possible, before the operation, to foresee this. Your limb will be immobilized in a splint for a period determined by your surgeon. Rehabilitation will be started according to his habits and prescriptions.
During the postoperative period your autonomy will be reduced. Your shoulder mobility may be reduced while the repaired structures heal and become firmly attached. This period varies between 6 weeks and 3 months. You will be seen again in consultation and the rehabilitation will be adapted to the evolution of your shoulder. These deadlines are variable and are given as an indication.

Immediate postoperative complications are rare. Like any surgery, there is a risk of hematoma which generally resolves on its own. It may exceptionally require an evacuating puncture or surgical drainage.
A skin scarring disorder may also occur. The evolution is very often favorable with the continuation of the dressings.
Deep infection is exceptional. It may require further surgery and prolonged treatment with antibiotics. You are strongly advised not to smoke during the healing period, as smoking significantly increases the rate of infection.
Algodystrophy is a painful and inflammatory phenomenon that is still poorly understood. It is treated medically and can last several months (sometimes even years), resulting in specific care with appropriate rehabilitation, additional assessments and sometimes specific pain management. It is unpredictable in its occurrence as in its evolution and its potential sequelae.
Adhesive capsulitis is a shrinkage of the joint capsule resulting in a decrease in passive and active mobility of the shoulder. Of unknown origin, it recovers in about a year but can sometimes lead to partial sequelae stiffness. Nerve damage is exceptional.

The goal of this surgery is to improve the overall function of your shoulder by eliminating pain. Calcifying tendinopathy is a disease of your tendon, it is not possible to remove your tendon otherwise your shoulder may no longer move. It is therefore sometimes necessary not to remove all the calcification in order to preserve your tendon. The more limited the calcifications, the better the chances of healing.
Climatic or positional pain may persist over time, but the vast majority of preoperative pain gradually disappears.
Surgery for calcifying tendinopathy of the rotator cuff of the shoulder is a frequent surgical procedure in orthopedics. It is an operation that gives good results depending on the type of calcification operated. The purpose of this operation is to remove the disability induced by the rotator cuff lesion. In the absence of complications, this operation allows the patient to regain a physiological shoulder for his age.