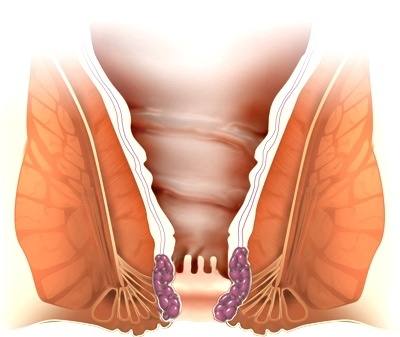 The patient is hospitalized the day before the operation. There is no particular colic prepartition. On the other hand, the prescription of transit facilitator makes it possible to prevent reflex constipation which is very frequent after this operation.

Classic hemorrhoidectomy involves removing distended skin and mucosa along with the vascular platoon enlarged, at the very upper part of the anal canal, at the origin of these vessels. Three such excisions are necessary. "Bridges" of skin and mucosa are preserved, intact, between excisions. If they cover veins intermediate to the three platoons, they are excised ("removed"). These wounds are not stitched up, but left open. This is to prevent a tight suture from becoming complicated by infection (presence of faeces) and to avoid shrinking the anus.
Sometimes, hemorrhoids are so large and especially circumferential, that it is impossible to remove them entirely without risking creating a stenosis. Most of it is then removed during the operation and it is judged, 3 to 4 months later, whether a possible need for additional surgery is necessary.
The operation lasts 20 to 40 minutes, only loses a few milliliters of blood. She required general anesthesia or an epidural.

The postoperative course of the hemorroidectomy is marked by the healing of the three wounds. Local care is necessary until complete healing of the skin (approximately 15 days), that of the mucosa may be longer (20 to 30 days), exceptionally delayed, especially in the event of an associated crack, up to 60 days. Of course, the consequences felt will decrease as healing progresses.
Schematically this period is marked by four kinds of disorders:
Pain. She is the one who gave this surgery a bad reputation. In fact, in our practice, and due to technical modifications made for this, it is less than is generally said. The first hours are "covered" by the injection of a local anesthetic performed at the end of the procedure. The relay is taken the first night by injections of morphine. Thereafter the drugs are delivered according to the case, the pain being variable from one operation to another. Basically painkillers are needed for 7 to 15 days.
Blood discharge. They are minimal, normal as long as everything is not healed.
Oozing from wounds, also normal, requiring padding.
Gas incontinence, also normal and disappearing with healing.

Complications are infrequent. Hemorrhage can occur in the first hours, release of a node, or rather coagulation with an electric scalpel. It requires simple, emergency surgery. It can be delayed until the 10th day by the fall of a healing scar. If it is abundant, you must immediately consult the emergency room to judge whether or not surgery is necessary. These frank haemorrhages do not affect more than 5% of the operated, 2 to 3% justifying a surgical gesture. Infections in the operated areas are very rare, especially since we prevent them with systematic antibiotic therapy given during the operation and continued for 48 hours.
Stenosis (narrowing) of the anus occurs if care is not taken in at least 5% of cases. It never happens, in our experience, if the post-operative care is well done. This stenosis is very troublesome and difficult to treat. So we have to warn her. To do this, you are asked to do a digital rectal examination yourself every day by inserting your index finger, covered with a petroleum jelly finger cot, deep into the anus. And this from the 7th day after the operation and until the post-operative consultation (between the 15th and 21st day). If you are unable to perform this touch, because it is too painful, even if you take your time, contact the Service immediately. The remedy consists in making this touch under general anesthesia, by dilating the anus well, which solves the problem.

Even if classic hemorrhoidectomy remains a painful procedure with long consequences , you should know that if this operation is justified, all the other treatments having failed (remember that only 10% of patients suffering from their hemorrhoids will ultimately be operated on), the satisfaction rate of those operated on is very high, close to 90%.< /p>