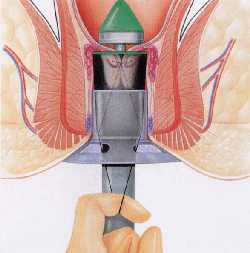 The patient is hospitalized the day before the operation. There is no particular colic prepartition. On the other hand, the prescription of a transit facilitator makes it possible to prevent reflex constipation which is very frequent after a hemorroidectomy.

After the operation, the pain is controlled thanks to infusions and then by oral painkillers ( especially anti-inflammatories). the nurses monitor the dressing in the event of the occurrence of recurrent bleeding (rare). Food is resumed the evening of the operation. The next day, the patient can get up. The infusions are stopped. Locally the cleaning is ensured by the patient himself using a perineal hand shower. This washing with lukewarm water is systematic after each bowel movement. The home discharge is organized on the third day after the operation with a prescription for analgesics and transit facilitator (mild laxatives). The supervisor plans a consultation appointment with the surgeon 1 month after the operation.