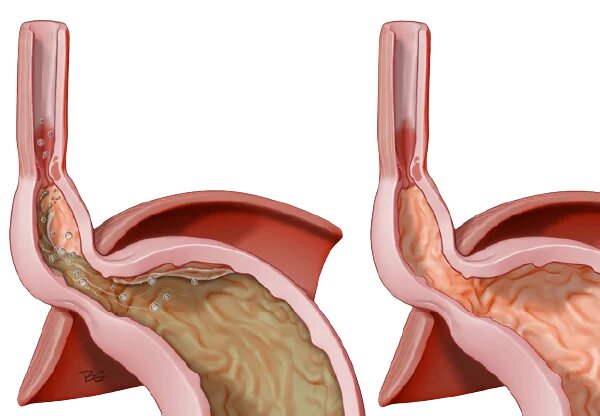 The hiatal hernia is, like any hernia, a hole in the wall. Unlike other hernias, this one is not visible because it involves the wall between the abdomen and the thorax. The orifice is located at the level of an area of ​​weakness which is where the esophagus crosses the diaphragm which is called the esophageal hiatus, hence the term hiatal hernia.

Principle of the intervention

The procedure involves reducing the hernia (putting the stomach back into the abdomen) and narrow the orifice (bringing together the pillars of the diaphragm) allowing the esophagus to pass without squeezing it too much.

Hospitalization is scheduled the day before the operation. In men, it is usual but not systematic to perform hair removal between the umbilicus and the nipple line. The operation is most often performed under laparoscopy and generally lasts from 1h30 to 2h. The number of trocar is 5 (5 small holes). There is sometimes a redon (plastic tube that comes out of the left side) and a bladder catheter is left for the first 24 to 48 hours (depending on the patients and the operators).

The day after the operation, the absence of assembly anomaly is checked by a radiography. This examination consists of having the patient swallow a radiopaque product. if this examination is normal, the nurse removes the gastric suction tube after consulting the surgeon. Two days later (D2), the bladder tube and the redon are removed and a consultation with the dietician is organized. prescribed for the first postoperative month of split and ground meals. Capsules and large tablets should either be opened or crushed. It is best to avoid carbonated drinks that distend the stomach. In fact, this type of intervention frequently causes transient discomfort during belching. The infusions are withdrawn on the second or third postoperative day and discharge is possible from D4 or D5 depending on the patient's condition.

The work stoppage is 1 month until the consultation with the surgeon. Dietary advice will be given to the patient. A ground split diet is better tolerated in the first weeks.

Esophageal wound
The bleeding
The pneumothorax (the pleura is very close to the hernia)
Functional digestive disorders (often transient) which are: dysphagia and eructation discomfort.< /p>