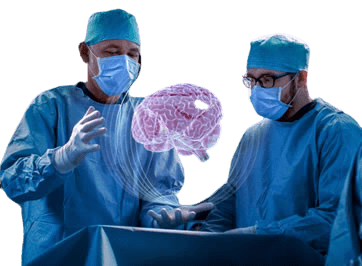 Vascular neurosurgery is a complex and highly specialized area of ​​neurosurgery. The service offers a joint multidisciplinary consultation between neurosurgery and neuroradiology. The consultation aims to meet all the needs relating to the non-drug treatment of diseases and malformations of the cerebral vessels and the associated follow-up.
The treatments are discussed in a multidisciplinary debate in close collaboration with the interventional neuroradiology team performing the endovascular treatments. In some cases, combined treatments are offered, always with the aim of ensuring maximum patient safety.

Vascular neurosurgery concerns the treatment of diseases of the blood vessels in and around the brain, such as aneurysms, arteriovenous malformations (AVMs), dural fistulas or cavernomas.

Generally asymptomatic aneurysms are localized dilatations of the arterial wall resulting in the formation of a "pocket" of blood. If the aneurysm ruptures, patients experience very intense headaches, sometimes accompanied by neurological disorders. In case of rupture, emergency treatment must be undertaken, either by endovascular route (catheter) or by surgery, depending mainly on the location and size of the aneurysm.

Arteriovenous malformations (AVMs) consist of abnormal connections between veins and arteries. Due to the difference in blood pressure between these two types of vessels, a "nidus" is formed, a sort of tangle of vessels similar to a ball of wool. AVMs can cause bleeding or seizures. Depending on the case, they can be treated by radiosurgery, intravascularly (catheter) or surgically (resection of the lesion).

Dural fistulas are also abnormal connections between arteries and veins. In this case, the latter are found in the dura mater (the membrane that surrounds the brain) and are called venous sinuses. They can cause bleeding or seizures. Depending on the case, they can be treated intravascularly (catheter) or surgically (resection of the lesion).

The cavernomas generally asymptomatic, are malformations of the veins. These injuries can cause bleeding or seizures. Surgical treatment may be considered if symptoms appear.