What is it about ? 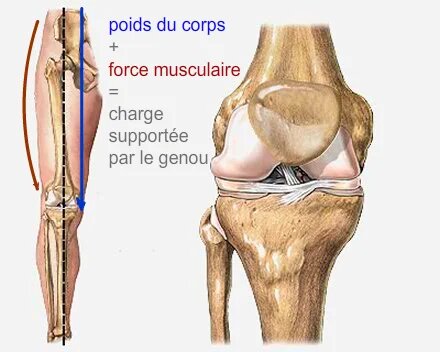 Initial internal femoro-tibial osteoarthritis of the knee in subjects under 60 years of age is a pathology that generally occurs on a defect in the axis of the lower limb (genu varum). The surgical treatment consists of performing a tibial osteotomy in order to remove this anomaly by correcting the axis of the lower limb. The weight distribution will then be in a non-painful zone. This conservative intervention makes it possible to avoid or delay the use of a total knee prosthesis. 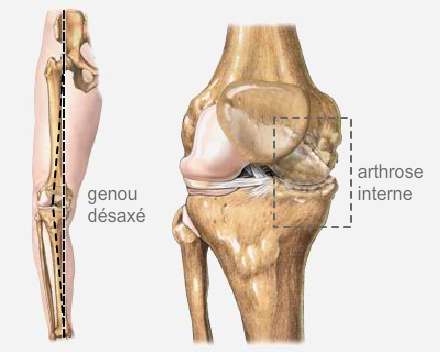 Incipient internal osteoarthritis is the wear of the cartilage present between the femur and the tibia of the internal part of the knee. The morphology of the lower limb is often the main cause. On a Genu Varum form, all the weight of the body passes through this inner part of the knee causing premature wear of the cartilage and the meniscus.
These anatomical lesions will cause pain in the knee as well as stiffness and difficulty walking requiring the use of anti-inflammatories and painkillers.

There is, at the level of the lower limb, a real "architectural" disorder of the axis of the knee which is in Genu Varum. This defect is congenital, bony and will not correct itself spontaneously over time; on the contrary, it tends to get worse due to internal wear of the joint. The natural evolution is towards the complete wear of the cartilage, an increasingly significant discomfort and an increasingly difficult walk with the appearance in addition of ligament lesions singularly aggravating the deformation and thus complicating the surgical treatment.
It is therefore necessary to act quickly in front of such a clinical picture in order to be able in the young and active subject to propose a conservative intervention (non-prosthetic) whose goal will be to relieve the internal part of the knee from the constraints which are exerted on its level and thus to slow down the progression of osteoarthritis by displacing the axis of the knee by means of a corrective osteotomy.
It is the tibial valgus osteotomy that corrects this architectural disorder and whose primary goal is to restore a more physiological axis of the lower limb.

The tibial valgus osteotomy aims to correct the axis of the lower limb. This correction is made by a partial section of the tibia just below the knee joint in the metaphyseal area.
We can perform external subtraction osteotomies (by removing an external bone wedge) or internal addition osteotomies (by adding a bone substitute wedge). We have chosen for many technical reasons to mainly use the technique of internal addition osteotomies.
A short incision is made at the lower inner part of the knee. The tibia bone is exposed, the tendons, arteries and nerves are pushed aside. A pin visualizing the future bone section is placed under radiographic control.
The tibia bone is then partially cut with a saw, leaving an external part intact which will create a bone hinge. The limb axis is corrected by opening the slice of section, thus playing on the elasticity of the well-preserved external bone hinge.
The size of the internal opening is determined according to the initial deformation. A bone substitute wedge is then introduced into the osteotomy site to maintain the desired correction. The size of this wedge is, of course, determined very precisely according to the deformity to be corrected and thanks to the preoperative planning.
A plate bridging the osteotomy is then fixed to the tibia by screws, thus allowing the correction obtained to be maintained and rapid weight-bearing thanks to the solidity of the assembly.

Rehabilitation and return to activity

During the first 3 weeks following the operation, walking is done using two canes in order to relieve the knee of your weight with a strict offloading of your lower limb. The splint is maintained during your movements.
At the end of the 3rd week, you will consult your surgeon with a control radio. The progressive loading of your lower limb will then be programmed. Rehabilitation can therefore be started, it will insist on muscle maintenance and recovery as well as on weight-bearing. If your knee lock is correct, the brace can be permanently removed. There is no limitation in the flexion of your joint. The resumption of driving is possible as soon as walking is done without crutches, generally after the 2nd month. The resumption of professional activities depends on the physical load imposed on your knee, it takes an average of 3 months off.

The main complication of tibial valgus osteotomy by addition is the absence of consolidation of the osteotomy occurring in 2 to 5% of cases. In this case a new intervention is essential and consists in making a bone graft which generally allows a good secondary consolidation.
Phlebitis may also occur requiring appropriate treatment by a specialist. The follow-up of the preventive treatment is therefore essential.
A post-operative hematoma is a rare complication but requiring surgical drainage when it occurs.
The risks listed do not constitute an exhaustive list. Your surgeon will give any additional explanation and will be at your disposal to discuss with you each particular case with the advantages, disadvantages and risks of the intervention.

The expected results of your operation

These procedures are indicated for patients under the age of 60. They allow patients to see the pain disappear in the majority of cases, however sometimes there may persist a small painful bottom compared to the preoperative period.
The advantage over fitting a prosthesis is the feeling of still having a natural knee and being able to flex it more significantly.
Normal walking without any lameness is generally obtained in the 3rd month following the intervention. The beneficial effect of a tibial valgus osteotomy lasts on average about ten years. If the pain reappears after this time, the installation of a knee prosthesis will then be considered.