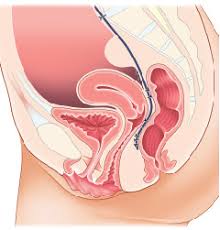 Rectal prolapse is more common than you might think and affects two very distinct populations. It is either an insufficiency of means of fixation of the rectum and it then affects rather the young man, or it is a defect of fixation and support of the rectum by dehiscence of the pelvic floor and the sphincter apparatus to which cases it is more often elderly women.

Objective of the intervention

The operation consists of reattaching the rectum to the pelvic cavity using a strip. This procedure does not require a stomach tube. On the other hand, the bladder probe facilitates the exposure of the pelvis and the dissection in the rectovaginal septum.

Before the operation, it is important to promote regular transit by prescribing laxatives. In general, a prescription for duphalac for one sachet three times a day is sufficient. The patient is hospitalized the day before the operation. There is no hair removal to do on the abdomen or perineum. A normacol enema is done at 6 p.m. to promote rectal emptying. This enema is repeated the morning of the operation at 6 a.m.

Drinks are authorized the evening of the operation and a laxative is systematically prescribed postoperatively immediate. The infusion is useful only during the first hours in the most fragile patients.
From the day after the operation an early rise is recommended and the solid food is resumed by favoring a diet rich in fiber. For this, dietary support is desirable. The infusion and the bladder catheter are removed. Discharge can be considered around the 4th or 5th postoperative day. For young patients, in activity, the work stoppage is one month.

The patient leaves the service with transit facilitators (Duphalac), standard analgesics (Doliprane), dietary recommendations (fiber-rich diet) and an appointment with his surgeon. A functional rectal assessment will be scheduled (especially for young patients) at 3 months with a gastroenterologist.

Severe constipation this is the most common complication, especially in cases of extensive rectal dissection. It corresponds to a malfunction of the rectum which is no longer able to evacuate stools correctly. This complication is to be feared especially in the event of slow transit before the intervention.
Infections it is to be feared in elderly patients who have already undergone vaginal surgery. The presence of a foreign body (strip) makes treatment more difficult, which will include antibiotics.
Erosion of the rectal wall this complication can occur some time after the operation. It results in rectal pain and emissions of mucus. On examination by rectoscopy, the distal end of the strip may be apparent. The treatment most often consists of completely or partially removing the strip.
Disorders of faecal and/or urinary continence although most of the time faecal continence is improved, these Disorders may appear postoperatively, especially when continence is almost normal initially. They can be corrected secondarily through perineal rehabilitation.
Genito-urinary disorders these problems occur in young patients most often men with a narrow pelvis. The problem comes from the dissection of the promontory or there is a lesion of the hypogastric plexus.