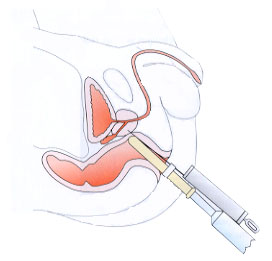 Removal of the prostate can be performed by various approaches and methods. The most used techniques concern surgery with retropubic or perineal access and laparoscopic surgery without or with the help of the robot. The goal is to remove the prostate with any cancers and, if necessary, local regional lymph nodes. The indication for ablation of the gland must however be limited to patients who are not certain of distant metastases at diagnosis. Indeed, in the case of certain distant metastases, a medical treatment of the disease will be more appropriate, without risking the side effects of the intervention.
The surgery will take an average of 90 to 120 minutes, depending on the size of the prostate and the characteristics of the disease and the patient.

After the surgery is completed, the patient will stay in the hospital for a minimum period of 3 days. The discharge will take place, if the clinical conditions allow it, with the bladder catheter in place which will be removed, after cystography, after 3 to 7 additional days (X-ray examination allowing to check the good healing between the stump urethra and the bladder). Metal sutures from the abdominal wound will be removed 7-8 days after surgery, while drains will be removed after 24-72 hours.

Like any major surgery or medical procedure in general, radical prostatectomy in its various techniques can involve risks and even permanent complications.
The perioperative mortality rate is approximately 1-4%, while operative mortality is less than 0.5%.
In brief, we can divide the complications according to the period of onset and evolution into: intraoperative, early (up to 30 days after surgery) and distant (after 30 days after surgery).

Radical prostatectomy surgery has more or less profound repercussions in the sexual field:
The patient may suffer from erection problems (erectile dysfunction) for several months (even 12-18 months ); in some cases, this problem is permanent.
The ability to ejaculate changes permanently, with the patient no longer emitting semen or no longer emitting any only a small amount.
However, prostatectomy surgery usually involves a permanent state of infertility.
For some time, the patient may not feel the same sexual interest as before the surgery.

When is it contraindicated?

The results of a radical prostatectomy depend on factors such as the patient's age and health, as well as the severity of the prostate cancer.
In general, the hopes of success of the operation are high when the tumor is small and the patient is healthy.