Can we make a custom nose? 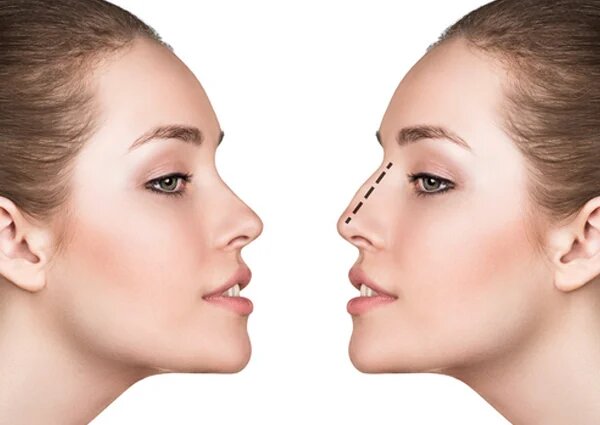 The rhinoplasty remains one of the most delicate cosmetic surgery procedures. It depends on morphological, psychological, ethnic and technical factors. The aesthetic analysis of the face is essential, the nose must be integrated harmoniously with the rest of the face and with the general morphology of the patient; the psychological profile, too, must be carefully defined, to propose a nose subtly adapted to the patient's character and personality in order to respect them. There should not and cannot be a standard nose.
The technique will be personalized, the possibilities of modifications are wide. Cosmetic nose surgery that suits you perfectly can usually be performed, but keep in mind that the quality of the skin (thickness, lack of elasticity) sometimes limits these objectives. It is sometimes impossible to make a thin, projecting tip on a massive, wide, thick-skinned nose.
Viewing "before and after" photos of cases similar to yours will allow you to understand the expected result. A simulation on photos taken in consultation will be carried out by the plastic surgeon to refine the preparation of the intervention and the complete understanding of the project. The design of the surgical project for your rhinoplasty will be the result of extensive communication where all your aspirations will be addressed on the one hand and all the realistic possibilities of change that the surgeon can achieve will be transmitted.

What structures can be modified during rhinoplasty?

The bridge of the nose

Too rounded in profile (bump), it must be reduced; too broad in front, it must be refined; deviated, it can be straightened. Too flat, it must be provided with a material (cartilage graft, bone or implant) to give a thin and projecting edge to a naturally flattened nose (Asian or African nose for example) or after a major trauma (boxer's nose) or sometimes a recovery of excessive primary rhinoplasty. This is called augmentation rhinoplasty.

The tip of the nose

Drooping, it will be raised. Too long, it can be shortened. Too flattened or badly "designed", it will be rebuilt.
A radical modification is most often possible combining resection, restructuring and apposition.
A remodeling to refine a tip that is too wide or too square, can also be designed on its own, without touching to the rest of the nose. This is called advanced rhinoplasty.

Too wide or too thick can be reduced at the cost of a small scar hidden in the rounded hollow at the base of the wings of the nose, at the top of the nasolabial fold, hollow delimiting the junction between the cheek and the white lip.

Can a partition problem be treated at the same time?

Yes, it is sometimes necessary to straighten a deviated nasal septum, a source of respiratory discomfort. It may participate in the deviation of the whole and its treatment is part of the aesthetic project.
In addition, any functional problem such as stuffy nose, tendency to allergic rhinitis or even sinusitis will be sought. A preoperative consultation with an ENT doctor will be requested and medical or surgical treatment may be associated with the purely aesthetic gesture if in doubt.

At what age can a rhinoplasty be performed?

Rhinoplasty can be performed from the age of 16, the age of the end of growth and development of the nose. It is nevertheless advisable to wait 18-20 years before making this kind of decision, in full knowledge of the facts and outside of a post-adolescent crisis. In the same way, rhinoplasty is very effective in complement of a facelift with the aim of rejuvenation up to 65-70 years.

What type of anesthesia is used?

What are the consequences?

Hospitalization is short, 12 to 36 hours maximum. The aftermath is almost painless.
When you wake up, you'll either have greasy locks or soft mini sponges that block your nostrils, or silicone tubes that let air through. The locks will be removed most often when leaving the clinic, but sometimes kept for a few days, if a septoplasty (straightening the internal partition) has been associated. A cast or a resin splint on the nose will be kept for 6-8 days. During this period, the lower eyelids and upper cheeks are swollen and show more or less marked bruises. Cold saline masks will be prescribed. The marks are maximum at the 48th hour.

Where are the scars?

The scars usually are essentially mucous, hidden inside the nose, made with absorbable sutures. Sometimes, in case of too long or too wide nostrils, it is possible to reduce them and the scar will then be very little visible, camouflaged in the hollow around the nostril.
Finally, especially for important tip work or in certain cases of complex rhinoplasty, a very discreet small incision of about 3 mm will be made under the tip of the nose between the 2 nostrils (columella), we speak of an open way .

When can we judge the final result?

The nose evolves over a long period of 6 to 12 months. After 10 to 15 days, you are socially presentable. After 2 months, the result of a rhinoplasty is close to the final appearance (85%). The details of the outline of the nose, in particular the tip, will then gradually appear during the following year.
The nose is normally solid after these 2 months and all activities, especially sports, are then authorized.
The sun is prohibited for a month after rhinoplasty.
If small defects such as irregularities or a slight asymmetry of the tip appear, an additional time generally under local anesthesia is possible, but not before 6-8 months.

Rhinoplasty is an intervention that is now well codified, which takes place in a controlled and planned manner. The most modern approaches make it possible to project a truly tailor-made and original reconstruction of the nose. We must forget the image of stereotypical redone noses (Barbie doll, trumpet nose, too pinched nose tip) that jump out at you. We should no longer hesitate to have an operation if we feel a deep, old and fixed need for it. Fears should no longer exist in the face of this surgery. We are entitled to hope for a nose that looks natural and perfectly adapted to his person. On the other hand, it is essential to contact a real specialist in the field to hope for the best result from the start. Covers are possible but always more difficult.