What is gastrectomy surgery? 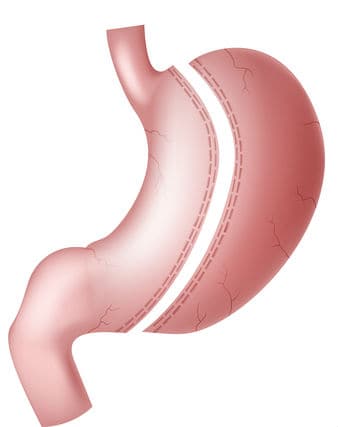 The gastric sleeve called gastrectomy sleeve in Tunisia is seeking its place in the surgical management of morbid obesity. This involves removing part of the stomach by laparoscopy to leave only a gastric “tube”. Like the band, a gastrectomy is a procedure that permanently reduces the volume of the stomach. restrictive. The reduction in food intake is linked to the fact that the small pocket, by filling up quickly and emptying slowly, will induce an early and lasting feeling of satiety. In addition, there seems to be a hormonal modification linked to the intervention contributing to the reduction in weight. Regular follow-up is also essential to ensure the success of the operation and to avoid any deficiency risk that could be serious.

How does the intervention take place?

Hospitalization takes place the day before or the day of the gastric sleeve with an expected duration of 4 to 5 nights after the operation before returning home. A convalescent home is not necessary. The sleeve gastrectomy is performed under general anesthesia by laparoscopic surgery, using 5 scars of 5 to 15 mm made in the upper part of the abdomen, allowing the introduction of a camera, of different instruments, and the stapling pliers. A small scar of less than 10 cm will be made at the end of the operation to remove the cut stomach segment after putting it in a bag.
The sleeve gastrectomy lasts from 1 hour 30 to 2 hours in general. It consists of cutting the stomach vertically, leaving a gastric tube in place. The other piece of stomach will be permanently removed. Unlike the ring, it is an irreversible intervention. The patient will have been warned of the possibility, in the event of a problem encountered during the laparoscopic intervention, of conversion to traditional surgery, that is to say of having to open the abdominal cavity wider.
After a sleeve, the patient will stay two hours in the recovery room before being returned to the general ward in the intensive care unit. With a laparoscopic sleeve, full physical recovery is obtained within 15 days to 3 weeks from the intervention.
The sleeve gastrectomy technique is well codified but remains a cumbersome, difficult gastrectomy with a high rate of complications. It can be as in any surgical operation of certain complications such as:
A reaction to anesthesia.
An infection.
Bleeding.
A wound of an abdominal organ especially when surgical dissection is difficult.
The local changes discovered during a gastric sleeve or the appearance of an unexpected complication may lead your surgeon to modify the intervention initially planned in order to do everything possible to remedy the difficulties encountered. The laparoscopic approach can be converted into a laparotomy (conventional surgery with a large scar generally in the middle straddling the umbilicus). The average conversion rate found in the literature is 8% and decreases rapidly with the experience of the authors.
The "non-surgical" nature of an obese patient and the cutting and stapling performed on the stomach can lead to complications specific to the sleeve. This is essentially the instrumental trauma of a large left liver, wounds to the spleen and above all a risk of poor healing of the stapling in the days following the operation (from 2 to 5 days). This poor healing can lead to a leak, that is to say a fistula, at the level of the row of staples in the stomach. Depending on each case, these complications can sometimes lead to having to intervene early again, possibly by opening the abdominal cavity wide (by laparotomy).
We will also mention as a specific complication of Sleeve gastrectomy, a paralysis of the stomach which empties very badly called "gastroplegia" and which can last several days. Sometimes, it is necessary to set up a nasogastric tube for a few days (tube in the nose which empties the stomach). The realization of Sleeves by laparoscopic route has made it possible to reduce postoperative complications and the duration of hospitalization obese patients compared to conventional surgery.
We will discuss the risk of phlebitis and pulmonary embolism which exists for any patient but which is greatly increased in the obese population. In order to reduce this risk, subcutaneous injections of heparin will be performed to thin the blood. These injections will usually start the morning of the operation and will continue for 10 days after the operation. A very positive point compared to the ring is that after the critical period which immediately follows the surgical procedure, the remote complication rate is very low. We will rarely mention a risk of occlusions and eventrations on trocar orifice. There will be no tightening to consider the assembly being stable and non-modifiable.
The list of complications described is not exhaustive, but it is important to understand that one of the objectives of the pre-operative consultation is to allow your surgeon to weigh up the risks that you would take by not being operated with the risks inherent in an intervention. The results of the Sleeve found in the literature show low perioperative mortality. If an operative indication has been retained, unlike cosmetic surgery, it is very likely that there would be more risk in postponing an intervention. If in doubt on your part, do not hesitate to ask your surgeon for details (cardiovascular in patients who already have coronary).

The length of hospitalization for a sleeve gastrectomy is usually 4 to 5 days before you can return home. There is no need for a convalescent home except in special cases. Patients are allowed to take liquid food the day after the operation and mobilization is very early, at best the same evening.
To the usual hyper-coagulability of the post-operative period is added in the obese an imbalance of coagulation (lower level of antithrombin III and reduced fibrinolytic activity). These are subjects at high risk of thrombosis. Pulmonary embolism is the leading cause of death in bariatric surgery. In addition to early rising, the prevention of thrombosis is done by subcutaneous injection of low molecular weight heparin at a preventive dose.
Most generally, sleeve gastrecomia is painless post-operatively and responds well to simple analgesics that will be prescribed to you when you leave the hospital. Patients are encouraged to resume light activity when they return from hospital, which is one of the advantages of laparoscopic surgery compared to laparotomy (large scar). The duration of stopping professional activities from 2 to 4 weeks is to be discussed in preoperative consultation taking into account the particular case of each patient and the nature of his work.
Sports activity can, in general, be resumed after 1 month after a sleeve gastrectomy. After an early departure from the establishment around the 4th or 5th day, the patients are seen again in surgical consultations 1 month later. The patient will then be seen every 3 months to 6 months for the first 2 years, a period to be adjusted according to the problems that may arise. Post-surgical dietary management is essential insofar as gastroplasties require an adaptation of the diet.
The psychological follow-up of the patient post-operatively is not systematic, it will be done in the event of a request for support from the patient, of psychiatric decompensation linked to the modification of the body image and the modification of food intake or in case of poor behavioral adaptation to the ring (sweateater for example).
The 1st week following the gastric sleeve the diet will be:
mixed="cottage cheese texture".
Thick soups.
Mashed vegetables (watch out for mashed potato flakes.
It should be fairly fluid not too thick), compotes, yoghurts, cottage cheese, baby food.
The 2nd and 3rd week the food should be of "tender" texture=texture of cooked apple, ratatouille, scrambled eggs, Choose foods that are neither too dry nor too stringy.
From the 4th week the diet returns to normal but keeping in mind that the tolerance to each food is very variable from one person to another: the chicken may not pass at all in a person and suit someone else without any problem. At the start you will have to “grope”, not only on the nature of the food but also on its volume, its size. If the food does not pass after being chewed, as a last resort, you can eat it pureed, in small pieces or blended.
Away from the sleeve gastrectomy, lifestyle and dietary rules remain important. Food intake must be regular with three meals a day and sometimes small snacks between these three main food intakes. But these snacks must remain limited and occasional and the fact of having several small meals between the main meals must be avoided.
It is also important to chew properly and for a long time before swallowing. Each bite should be chewed 15-20 times before swallowing. It is also important to allow sufficient time for the meal, if necessary 30-45 min. Patients should not drink during the meal.
You must try to limit yourself during the meal to taking food, without drinking. The purpose of this way of doing things is to keep food in the gastric tube for as long as possible and therefore to obtain a better feeling of satiety. It also reduces the risk of impaction of food at the exit of the tube, which could cause pain and vomiting. Liquids should therefore be taken 10 to 15 minutes before a meal. Suitable liquids are water, tea, coffee and slightly diluted juices. Large amounts of sweets and high-calorie liquids should be absolutely avoided.
Repeated intake of high calorie liquids, such as Coca-Cola, Sprite. for example, can lead to no weight loss after the procedure. Carbonated drinks (Vals, Badoit.) should be avoided because they cause stomach dilation which can lead to digestive discomfort and pain. excess skin or uneven weight loss.

It allows weight loss comparable to that of the gastric ring, but does not require such restrictive follow-up, since there is no tightening to be carried out .

The operative risks are not negligible (hemorrhages, disunity of the sutures) No loosening possible if one is very embarrassed and in this, we can say that it is a regression compared to the ring technique (which is adjustable, reversible and non-mutilating) The long-term future is still poorly evaluated ( possible dilation of the gastric tube?).

Tests to do before a sleeve gastrectomy