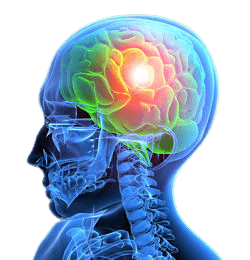 Brain tumors or tumors of the central nervous system (CNS), are an extremely heterogeneous group of neoplasms, which differ in morphology, site of onset, biology, clinical behavior, prognosis and therapeutic approach.
Brain tumors are divided into primary (mostly from the central nervous system) and secondary tumors or metastases, which originally develop in other organs, such as the lungs or breasts, and then spread to tissue nervous. Among primary brain tumors, there is a further distinction between glial tumors, or gliomas, which account for approximately 40% of all CNS tumors in adults, and non-glial tumors.
Tumors of the central nervous system are quite rare: In Europe, an average of 5 cases per year of primary tumors of the central nervous system are diagnosed per 100,000 inhabitants, which represents 2% of all cancer deaths.
The spread of more sophisticated imaging techniques (CT and MRI of the brain) is among the factors that have contributed to a gradual increase in the number of new cases per year (incidence), more relevant in the upper age group at age 65, in which the incidence more than doubled. Since there is no possibility of "early diagnosis", most of these tumors are diagnosed after the onset of symptoms.

What are central nervous system tumours?

Primary brain tumors, which grow directly into central nervous tissue, are very different neoplasms which, in turn, can be distinguished into glial tumors (or gliomas) , which arise from glial cells with neuronal support and nutrition functions, and non-glial tumors.

Glial tumors differ from each other on the basis of the type of cells from which they arise (astrocytes, oligodendroglial cells and ependymal cells) and on the degree of differentiation or malignancy. Traditionally, gliomas have been divided into low-grade tumors (low-grade glioma, LGG), more common between the ages of 20 and 40, or high-grade or malignant tumors (high-grade glioma, HGG) also called anaplastic gliomas, more frequent from 40 to 70 years. After the age of 70, glioblastoma multiforme is certainly the most common and aggressive form.
Glioblastoma can in turn be divided into primary arising de novo (wild-type IDH; non-mutated) and secondary arising from the evolution of a lower-grade form (mutated IDH).
The most common glial tumors or gliomas are:
Astrocytomas (including glioblastomas) which account for approximately 85% of all adult gliomas.
Oligodendrogliomas.
Ependymomas.

This is a very diverse group of (primary) brain tumors that do not arise from glial cells and which divide into:
Medulloblastoma: is the most common malignant brain tumor of childhood and adolescence, with a peak incidence between 2 and 7 years (much rarer beyond 21 years), which appears in the posterior cranial fossa and can develop in both hemispheres of the cerebellum (in the adult) or in the cerebellar worm (in pediatric age). It is a very aggressive and rapidly growing tumour, which however rarely develops extracranial metastases; however, it can spread to other parts of the central nervous system through brain fluid.
Meningioma: it is the brain tumor, usually benign, which originates in the arachnoid, the intermediate meninge which, together with the other two, envelops the entire central nervous system (brain and spinal cord) and accounts for 15% of all brain tumors, 90% are intracranial (2 cases per 100,000 inhabitants) and almost all are above the tent. It is more common in women between the ages of 60 and 70 and has a higher frequency in patients with neurofibromatosis type 2.
Primary lymphomas of the central nervous system: represent 2 to 3% of all brain tumors in immunocompetent patients (after organ transplant, with congenital immunodeficiency or autoimmune disease, or infected with the AIDS virus), especially men and women between the ages of 55 and 60 , while nearly 50% of all lymphomas develop in patients over the age of 60 and about 25% over the age of 70. Most central nervous system (CNS) lymphomas are of the large B-cell type.
Pituitary tumours: mostly benign, they develop in the pituitary gland and can alter its functioning, with significant effects on the production of hormones necessary for the body.

It is estimated that only 5% of glial cancers have a hereditary component, but there are different risk factors for neurological cancers. Some possible risk factors are also common to other oncological diseases, while the presence of some rare hereditary syndromes plays a role in the inactivation of tumor suppressor genes.
They represent risk factors for glial tumours:
Age: most of them are diagnosed between 60 and 80 years old.
Exposure to ionizing radiation: this is the best-known environmental risk factor for the development of gliomas, even twenty years after exposure, as shown by studies carried out on children subjected to irradiation of the skull for oncological diseases and on subjects exposed to nuclear explosions. However, no increased risk has been demonstrated by radiation used in diagnostic procedures.
Exposure to carcinogens such as vinyl chloride, pesticides and fertilizers.
Use of mobile phones: the relationship between the use of mobile phones (smartphones) and gliomas is very discussed and not proven. A recent analysis has instead highlighted a potential increase in the risk of developing acoustic neuromas (OR 2.4) and gliomas (OR 2.0) with cell phone use for several hours a day and for long periods of time (more ten years).
Immunodeficiency: the decline in immune defenses (as in AIDS patients for example) is a risk factor occurrence of primary lymphomas of the central nervous system.
Neurofibromatosis type I and type II.
Li Fraumeni Syndrome.
Turcot Syndrome.
Von Hippel Lindau Syndrome.
Cowden Syndrome.
Presence in the family (first and second degree relatives) of an astrocytoma (RR 3.82 and 1.91) and only for first-degree relatives of patients with gliobastoma (RR 2.29); further studies will be needed to clarify a possible association with environmental factors and to identify the molecular alterations associated with this familiarity.
There are currently no known risk factors associated with diet and lifestyle.

Symptoms of a brain tumor are due to increased intracranial pressure and compression of brain structures. The clinical manifestations and symptoms vary according to the site affected, the size and the aggressiveness of the disease, and are caused by the mass effect or the infiltration of the brain (cerebral parenchyma) and the destruction of brain tissue.
The most common symptoms are:
Headaches: these are usually severe headaches in people who don't have them never suffered before, or they increase in frequency and intensity in people who have already suffered from them. Associated with the mass effect (presence of intracranial mass), about 35% of patients are affected by headaches, especially if the headache attacks (or migraines) are stronger in the morning and are associated with nausea, vomiting or other symptoms of neurological origin.
Convulsions: these occur in about 30% of patients with glioma, especially low-grade ones.
Visual problems: blurry, double vision or loss of peripheral vision.
Nausea and vomiting.
Memory loss.
Mental confusion, spatial-temporal disorientation.
Movement disorders.
Disorders of sensitivity.
Impaired understanding of written or spoken language.
Balance disorders
Difficulty articulating speech.
Sensory Hallucinations.
Behavioral changes and unstable personality.
Hearing problems (sudden).
Sphincter incontinence..

Typically, the diagnosis of a brain tumor begins after the patient has contacted their GP for symptoms. The doctor then assesses the need for additional investigations with the specialist in neurology or prescribes instrumental diagnostic tests. In some cases, however, the onset of symptoms is sudden and requires urgent evaluation in the emergency room.

Surgery to completely remove (radical surgery) or the largest possible volume of tumor is the standard treatment for all brain tumors, but it is not always a viable option. Once the tumor mass has been surgically removed, the goal is to define the histological diagnosis and improve the patient's quality of life. When only partial removal is possible, the goal of surgery is to avoid disabling and permanent neurological deficits for the patient. In some cases, however, surgery is absolutely not possible.
The complete removal of the tumor, in addition to producing a significant improvement in symptoms, allows to improve the possible response to radiotherapy and chemotherapy, thanks to a more efficient oxygenation of the tumor tissues. In high and low grade gliomas, according to the results of a recent review of scientific publications, there is a correlation between radical surgery and a more favorable prognosis.
Brain tumor surgery involves strategic and multidisciplinary preoperative planning through the study of tumor morphology with CT and MRI, and metabolic with PET, to define the functional location of the lesion to be removed.
The surgery requires a craniotomy (the opening of the skull) with sophisticated instruments, intraoperative neurophysiological techniques that identify "critical" areas for language, movement and coordination, and preserve them during removal of the tumor mass. Depending on the tumor characteristics, the operation can take place under general anesthesia or with intraoperative awakening (awakening surgery).

After surgery, radiotherapy generally aims to target tumor residues localized by MRI (or PET), with high-energy ionizing radiation, i.e. a beam of penetrating photons of 5-10 MeV energy, to damage the DNA of cancerous cells, destroy them, and try to preserve, at the same time, the healthy cells and the tissues adjacent to the mass.
It is possible to perform conformal radiotherapy , a technique capable of concentrating the beam of radiation more effectively and thus reducing the exposure of surrounding healthy tissues and the side effects, paying particular attention to the structures critical such as optic nerves, optical chiasm and medulla oblongata.
In some cases, stereotactic radiotherapy or radiosurgery may be indicated, which in 2-3 sessions allows very high doses of radiation to be directed in a single fraction directly on the "target" (the tumor mass or its residue after removal).

In the medical treatment of brain tumours, the choice of chemotherapy depends on the type of tumour, the patient's clinical picture and the presence of comorbidities (other illnesses). Chemotherapy uses drugs that can inhibit the growth and proliferation of cancer cells, causing them to die. Chemotherapy drugs that can cross the blood-brain barrier can be given orally or intravenously, alone or in combination with other drugs, or in combination with radiation therapy.

Motor, cognitive and/or behavioral rehabilitation is a fundamental aspect of the treatment of patients with brain tumors, both for the direct impairment of certain neurological functions induced by the disease (for example, hemiparesis or monoparesis, balance disorders, speech and reading disorders, memory, spatio-temporal orientation), and as a result of the treatments carried out.
Rehabilitation treatment aims to regain the person's autonomy, thanks to different personalized rehabilitation approaches (motor physiotherapy, speech therapy, occupational therapy).
The evaluation of the neurological rehabilitation specialist is fundamental before and during rehabilitation, also using specific scientifically validated tests, in order to establish on which areas and abilities it is essential to intervene to obtain the best functional recovery and possible quality of life for the patient.