What is Gastric Bypass?

The gastric Bypass, "Gastric Bypass" of the Anglo-Saxons, proceeds from a restrictive mechanism, like the ring gastric, coupled with a malabsorptive mechanism due to a "short circuit" assembly. The stomach is reduced, as by the gastric band, to a small upper pocket, but the lower part, that is to say almost the whole of the stomach, is no longer in circuit, contrary to the assembly procured by the ring, so that the mixing of food and its pre-digestion by gastric acid and enzymes are reduced to their simplest expression, since they are limited to this small upper pocket. 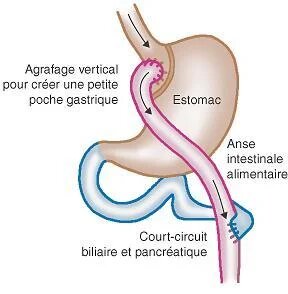 Similarly, the entire duodenum and a more or less significant part of the small intestine are also excluded from the food circuit, thus providing incomplete absorption of nutrients (diagram). It is thus possible to achieve faster, more complete and more certain weight loss.

The Benefits of Gastric Bypass

The advantage, however that we find there, is essentially a lesser constraint than the ring, obliging less than him to a dietary observance, not claiming as much as him a scrupulous follow-up, avoiding in particular the adjustment of tightenings. Practiced for a long time in the United States with an "open belly", the Gastric Bypass is the reference intervention across the Atlantic. The realization of gastric bypass by laparoscopy made it more attractive and popularized it in turn in Europe, especially since at the same time the complications of the bands were unmasked after the surge of enthusiasm that this same laparoscopy had brought them.

The Disadvantages of Gastric Bypass

Of course, gastric bypass deviates considerably from the physiology of digestion and inevitably has multiple deficiencies, consequences of malabsorption, which will require lifelong supplemental treatment with different vitamins. These contributions, even well observed, will not always protect against problems (bone demineralization, for example). The disadvantage of gastric Bypass, in addition to the deficiencies already described, is of course the heaviness of the gesture which presents a mutilating side, since it excludes the stomach, the duodenum and part of the intestine small, but also difficult to reverse unlike the band and not adjustable. The operative risks are also not at all of the same order (peritonitis by disunity of the sutures, haemorrhages, occlusions), with a certain percentage of mortality, whereas that -this remains exceptional with the ring. As for remote mechanical complications, they seem less frequent than with the ring, but can also require reoperations (intestinal occlusions in particular).

How to choose between gastric bypass and gastric band?

The indication of Gastric Bypass for these reasons is in principle reserved for serious dietary deviations, which could not go well with the constraint provided by a band and for very severe obesity whose BMI exceeds 50 or 55 and for whom Gastric Bypass is the guarantor of more spectacular weight loss. However, there are supporters of the ring, even in the "super obese", if the criteria for selection and preparation of behavior are respected and the follow-up correctly ensured: we can then hope for a sufficient weight loss to obtain, even in this field, considerable well-being and a significant reduction in comorbidities. And the recourse in a second time to the gastric Bypass remains possible if the weight loss proves to be insufficient. What pushed many surgeons in France to turn to the gastric Bypass, it is also the appearance of complications on the rings that they had posed, then removed. Patients thus placed in a situation of failure become potential candidates for Bypass, because the repositioning of a band has a great chance of reproducing the same complications. The occurrence of complications on gastric bands has logically increased progressively with the age of their pose, tempering the enthusiasm they had aroused. But this subject deserves the opening of a debate: It must be seen that the initial enthusiasm for the method responded to a fad and that everyone wanted to ask as many rings as possible without already knowing the risks. incurred, nor especially wanting to compel oneself to avoid them. However, the complications of the ring are not inevitable. To avoid them, a discipline is imposed not only on the operated, but also on the operators who must know how to observe a rigorous selection among the many requests which are made to them, as well as a binding preparation for their patients, then a follow-up and a supervision. unfortunately too often non-existent. No track is to be neglected, like the accompaniment by periodic information meetings with former and future operated, no detail like the practice of tightenings on the radio by the surgeon himself. With these precautions, we are convinced that the frequency of complications can be considerably reduced. However, before making the decision to have the operation, it is necessary to know that a certain number of rings placed will have to be removed one day for mechanical complications. But, you should also know that the fashion effect plays in turn for the gastric bypass. And it does not only affect the obese: surgeons themselves are sensitive to it. As for the ring a few years earlier. All in all, for us, it is better to try to reduce as much as possible the identifiable causes of the dilatations on the rings and to reserve the Gastric Bypass, a riskier intervention, only for aberrant eating behaviors irreducible.

Tests to do before gastric bypass